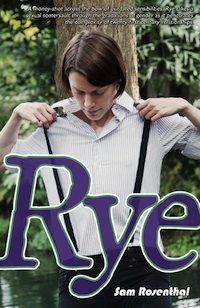 Rye: …. A money-shot across the bow of outdated sensibilities, Rye takes a sexual somersault through the gradations of gender in a penetrating portrayal of twenty-first century intimacy.

I’ve been hungry for stories about genderqueer characters, because I am one and also because I’m writing about them, and curious how other authors portray and explain genderqueer characters. Â I’m curious about how other writers respond to the challenge of introducing genderqueer to the masses. Â In this novel, Sam Rosenthal addresses that challenge by spelling out his understanding of ‘genderqueer’ in fairly clear language, no vagueness or hinting about. Â At times it’s a bit pedantic, interrupting the flow rather than enhancing it. Â Luckily for all of us who like hot erotica, it gets better.

“Our bodies are similar. Â Just like two guys. Â Except that my boi has a girl’s body; and yet he is not completely a girl.”

The novel tells the story of a developing relationship between two folks (then three) who identify as genderqueer, but come to that identity from different places. Â Along the way the characters also address the challenges of polyamory, parenting, long distance relationships and internalized homophobia, although polyamory is a well known definition now a days and many people practice it and there is also a lot of information online about it. Â There’s also some great scenes portraying D/s. Â My favorite is the bathroom force scene… totally worth a reread or two. Â Also, favorite character besides the main three is definitely Ruth — who seems a whole lot like a certain famous sex therapist, at least that’s the vision I have in my mind.

“He smiles and sits up on me, plunging deep. Â He brushes the hair from his eyes, rocking his hips, my cock lost within. Â Suddenly we’re like divers beneath the ocean waves. Â All sounds disappear, Rye floats on my cock. Â We drift together. Â Not certain exactly what is going where anymore, just swimming, rolling, diving deep.”

There are hot sex scenes and lots of dialog about gender identity versus sexual preference and practice (Check out blogs for adults). Â In fact, I had a hard time getting into the novel at first because of the author’s heavy reliance on dialog in the opening chapters. Â Fortunately, the novel becomes more balanced as it progresses so don’t be discouraged.

“My fingers spread on Rye’s back.. I move them along his ribs, trace his bones. He’s on his stomach in the earth by the streambed. Â My knees are wet, planted in muck.”

This started out as an erotic novel that grew into more, and I can see that. Â The sex scenes are rich and detailed, leaving this reader hot and bothered and needing relief. Â The content between the sex scenes is a bit thinner, until the end of the novel where it’s more consistent. Â I would have loved to see that richness of detail throughout. Â That said, it’s well worth reading. Â Considering that definitions of genderqueer are as varied as the people who embrace that identity, reading this novel gave me some more angles to view it from. Â Also, can someone tell me what a ‘Space Mohel’ is?

I’m giving this novel 4 boots, docked a little for inconsistency but boosted back up for hot sex scenes and good discussions of poly and relationships, I think it’s well worth reading. Â I’m looking forward to more from this author in the future.

This content is published under the Attribution-Noncommercial-No Derivative Works 3.0 Unported license.

One Response to Reviewing Rye by Sam Rosenthal